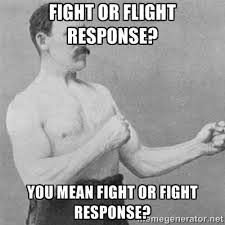 Every time I hear of violence in public places, I take a little mental trip.  Such violence is occurring in schools, churches, airplanes, trains, etc.  This journey takes me where the violence is.  I visualize the sights and sounds of the insane chaos experienced by those involved.  I do this for two reasons.  Firstly, I don’t ever want to become hardened and jaded to the emotional trauma suffered, empathy is what separates warriors from thugs.  Secondly, I want to put myself in their shoes, as much as possible, so I can work through all the possible response options.  In those situations, I see four potential options.

Lets break down these options, this will not be exhaustive, but I hope it is food for thought….

If you choose to FIGHT, here are seven more points to consider. . .

You may feel intimidated by this type of scenario!  Rightly so! The average, normal person does not think about taking a weapon way from a person intent on killing.  The normal person does not think about the mechanics of death, or what it will take to stop another person who wishes only pain and death for others.  If you want to prepare for this, learn!  Take some Krav Maga.  Watch videos of street fights. Learn to shoot. Buy a gun.  Get some pepper spray.  But most importantly, be aware.

When we get an adrenaline dump, our hard wired response is Fight or Flight. 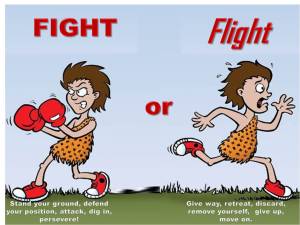 We are created to ACT under duress.  To successfully act, we have to have  forethought and a mindset to overcome.  With this in mind, it is so frustrating to hear police spokespeople, school administrators, etc. telling us to not fight back when we are threatened with violence.   We have become such a society of victims.  Everyone is saying to standby, as evil men prey on us.  I say enough is enough!

Be aware, be prepared, be victorious!

Part One of How to Survive a Mass Shooting – https://whitechocolateninja.com/2015/10/02/do-we-let-fear-decide-our-fate-or-do-we-err-on-the-side-of-courage/

If this is thought provoking, please sign up for email notifications of new posts.  My Facebook page has daily (almost) content added as well.  Check it out!

There are many of aggressive opinions above, and they are just that, my opinions.  My goal is to make you think!

3 thoughts on “How to Survive a Shooting/Stabbing/Violent Event, Part 2.”